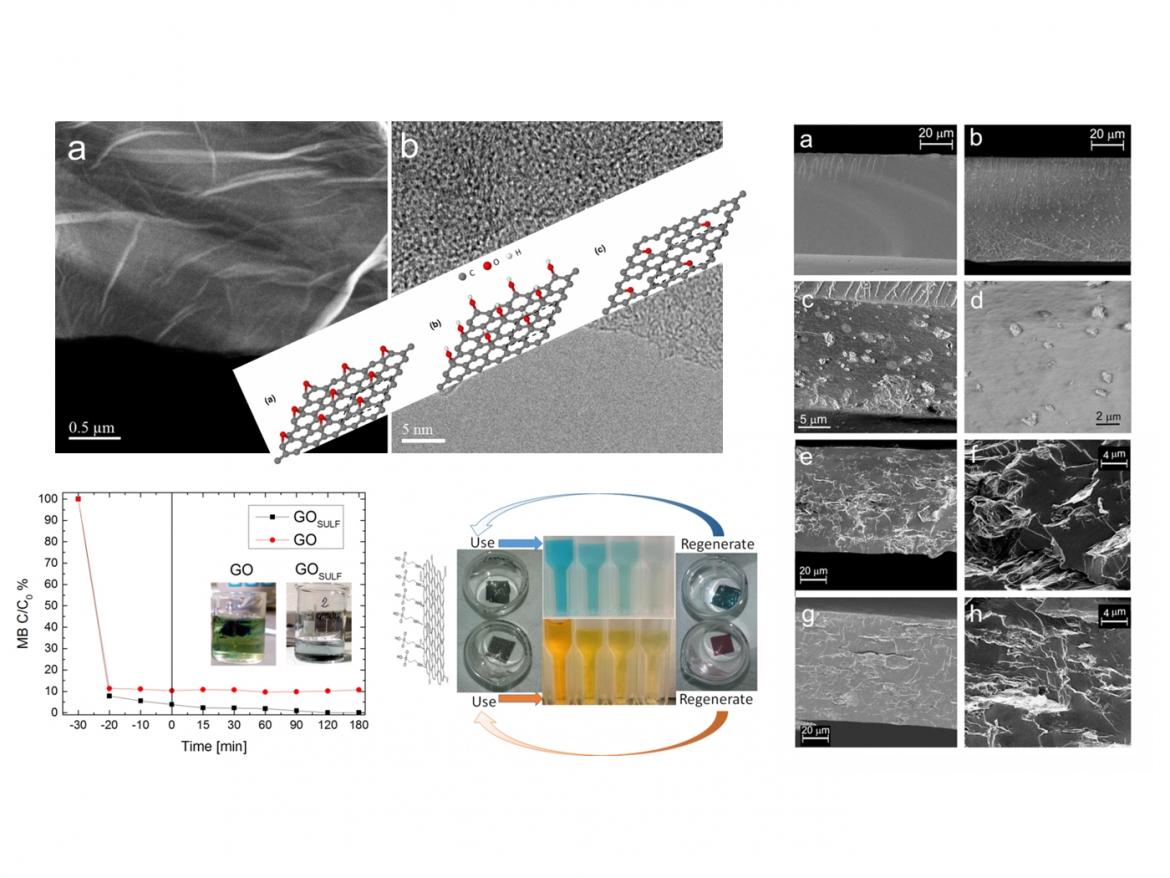 Among the functional nanostructured materials carbon-based nanostructures have an important place in water treatments for purification purposes. Their large aspect ratio and the several possibilities of functionalization are important properties, very helpful in the removal of contaminants. In particular they can act as adsorbents or they can be used in combination with semiconductor oxides (such as TiO2) to increase the photocatalytic efficiency, thanks to electron trapping effects. In addition to the study of nanostructures, we have considered, for the same purpose of water treatment, the use of nanocomposite polymeric membranes, that allow one to combine the advantages of membrane technology with nanoparticles and advanced oxidation processes (AOPs) in the removal of water pollutants, such as bacteria, heavy metals, dyes, etc.

Our activity is focused on the investigation of C-based nanomaterials, such as carbon nanotubes (CNT), graphene, graphene oxide (GO), reduced graphene oxide (rGO) and sulfonated graphene oxide (GOSULF) with particular attention to the properties that can be exploited for water purification. Different techniques, such as arc discharge, chemical vapour deposition or chemical methods are used for the synthesis of such materials. Our attention is also directed to the formation of nanocomposites made of carbon nanostructures mixed with titania or other semiconductor oxides, produced by co-deposition, electrophoretic methods or laser irradiation of mixed solutions. Therefore, besides the adsorption properties typical of carbonaceous nanomaterials, also their effect on the photocatalytic activity of semiconductor oxides is investigated.

A further aspect that is being considered is the study of antibacterial properties and toxicity of the materials described above.

The experimental activity is complemented by theoretical calculations based on the density functional theory that focus on the structural, electronic and spectroscopic properties of graphene oxide.

In addition to the study of nanostructures, we have considered, for the same purpose of water treatment, the use of nanocomposite polymeric membranes. The use of TiO2 powder, carbon nanomaterials or a combination of both dispersed directly in the water to be treated could have deleterious effects on the environment. Indeed, after the photocatalytic process the photocatalyst has to be removed by processes that are not always easy and fast. Furthermore, the catalyst cannot be easily used again. A possible solution is to incorporate the photocatalytic nanoparticles in polymeric membranes, that can be removed from water and regenerated for further use after purification processes. We have investigated the use of Nafion® and demonstrated that it can be used as a matrix in which TiO2, GO and GOSULF can be incorporated, with no photocatalytic efficiency reduction with respect to the same fillers dispersed directly in solution. These hybrid nanocomposites show very promising results in dye adsorption and photocatalytic degradation. We have demonstrated that such membranes may be regenerated and used for several dye removal processes. Further investigation on different kinds of polymers, fillers and their ability to remove water pollutants is in progress.

Fig.2: Use and regeneration of hybrid polymeric membranes containing graphene oxide for azo-dye removal from water.