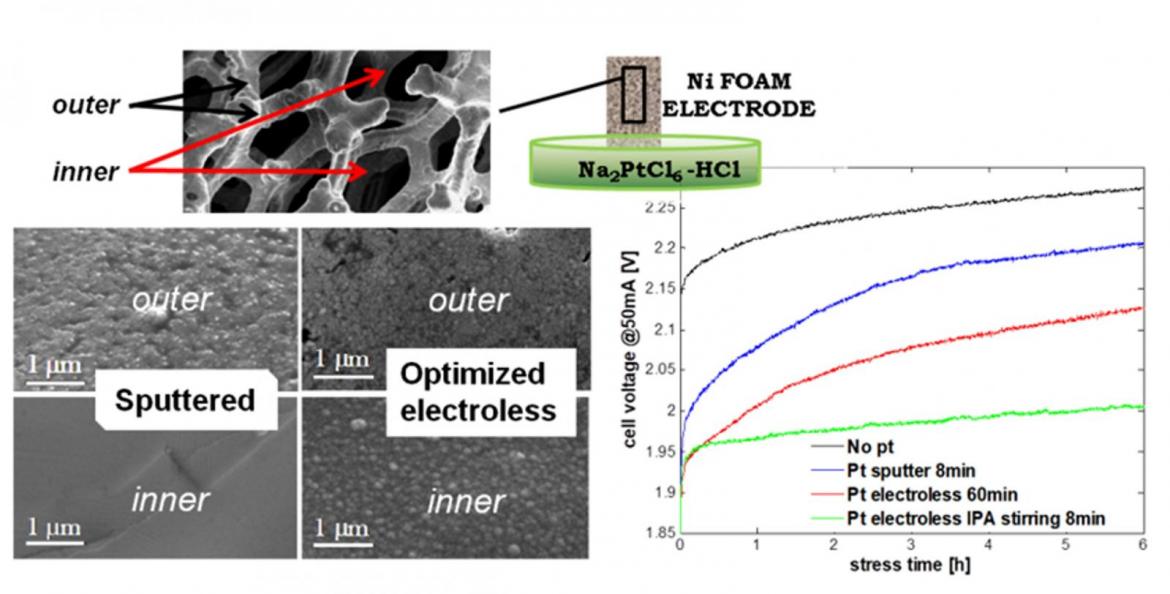 Splitting water into hydrogen and oxygen is a key component of clean fuel and chemical synthesis from solar energy. One of the approaches to produce Hydrogen at low cost is to couple together cheap and well established photovoltaic (PV) technologies with low cost electrolyser technology.

The European project PECSYS is based on this approach and it has the main objective to fabricate a demonstration system with size >10m2 producing with a solar to hydrogen efficiency >6%.

The catalysis will take place directly below the PV module, with no inverters and wires. The choice of good catalysts is crucial to assure low overpotential and good efficiency.

In order to obtain good catalysis while reducing the costs as much as possible, at IMM we have optimized Ni foam electrodes to be used for the hydrogen evolution reaction by functionalization  of the 3D structured foam with Pt, deposited by spontaneous galvanic displacement.

Such a technique allows the uniform coverage of the entire Ni surface with a very low amount of noble metal. As shown in the figure, a 40 nm thick Pt layer has been deposited on the Ni foam surface.

Figure 1: High magnification SEM micrograph in cross section of Ni foam electrode after 8 min electroless plating with stirring and IPA. The Pt thickness is about 40 nm even in the inner part of the electrode

The Pt coverage not only leads to reduced overpotential for the water splitting reaction, but also improves the stability of the electrodes, since it avoids the hydrogen adsorption at the Ni surface, which it is usually considered responsible for the deactivation of Ni electrodes at high current. The optimal amount of Pt is 0.01 mg/cm2, at least one order of magnitude lower than the value usually employed for proton exchange membranes (PEM) electrolysers.