The research activity on functional materials at IMM Headquarters in Catania includes different aspects, from fundamental studies, devoted to the understanding of growth mechanisms of new and advanced nanomaterials (carbon nanostructures, Si nanocrystals, porous TiO2, …) to their use in sensing, environmental, health and biological applications.
The presence at IMM-HQ of several characterization techniques allows to perform a complete evaluation of the physical and chemical properties of the produced materials and apply them to the most proper application field.
In the field of Functional Nanostructured Materials, the activity on C-based nanomaterials, such as carbon nanotubes (CNT), graphene, graphene oxide (GO), is focused on water purification applications. In particular, photocatalytic activity, antibacterial properties and toxicity of the nanomaterials are investigated. The experimental activity is complemented by theoretical calculations based on the density functional theory that focus on the structural, electronic and spectroscopic properties of carbon based materials.
For similar water purification applications nanocomposite polymeric membranes are prepared and characterized. Photocatalytic nanoparticles can be embedded in polymeric membranes, that can be removed from water, regenerated and used several times after purification processes, getting rid of the  deleterious effects due to the nanomaterial dispersion in the environment.
Low temperature high density plasma is used for the synthesis of Si based and C based materials, eventually doped with P or B, like a-Si but also a-SiC and oxynitrides/oxycarbide SiOxNyCz, with possible applications in photovoltaic devices and thin film transistors.
Ni-Si compounds have also been investigated due to the need to get thin, scalable, reliable metallic contacts and push as far forward as possible the scaling down of micro/nano-electronics devices. A detailed study on the crucial role of the early stages of the Ni-Si atomic interaction allowed to show how this interaction has a huge impact on the reaction process and on the structural properties of the reaction products. In this contest, trans-rotational silicides represent a new scientific breakthrough
In the field of Chemical, Physical and Biological Sensors both electrical and optical transduction methods are considered.
Part of the activity in the field of sensors for health, environment and food applications is focused on the design and fabrication of optical and/or electrical devices for biological molecules recognition (DNA, toxins, proteins) and/or chemical elements (cyanides, heavy metals) in liquids or food. The optical transduction method is based on the use of silicon photomultipliers (SiPM), while the electrical detection systems are based on the use of Si devices, such as MIS diodes and MOSFET devices.
Another part of the research activity in the field of environmental and biological sensors involves the use of sensing devices based on Carbon-nanomaterials. Carbon nanostructures can be used as the active layer of chemical, physical and biological sensors and show high sensitivity and specificity. The devices based on electrical transduction (CNT-FET, CNT-resistors, .. ) are designed, fabricated and characterized at IMM-HQ, using advanced materials, low cost processes and paying particular attention to large-scale integration issues.
Among the new materials for gas sensing applications sputtered multi-scale-porosity-TiO2 layers are also grown and investigated. Using sputtering approaches to grow porous TiO2 thick layers represents a challenge and it would offer huge advantages in terms of reproducibility, purity, up-scalability of the deposited layers, mostly impacting on the cost of the final commercial products.
Finally, in the field of devices for health applications, the electromagnetic manipulation of human cells by dielectrophoresis is under investigation. This study can find application in the sorting of tumoral cells from a solution containing a mixture of healthy and cancer cells, allowing to concentrate the second ones and making them more easily observable. Design of the full device (both the microfluidic and the electrical parts) is aided by computer simulations. 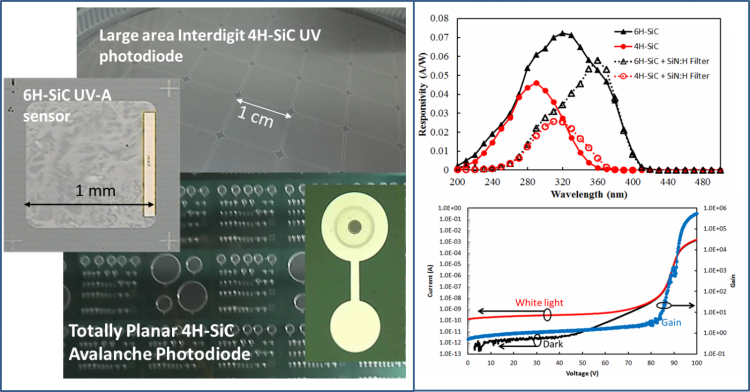 Monitoring of UV radiation and of its components UV-A and UV-B is of great interest for human healthcare. In past years we realised  visible blinde 4H-SiC UV detectors  based on... 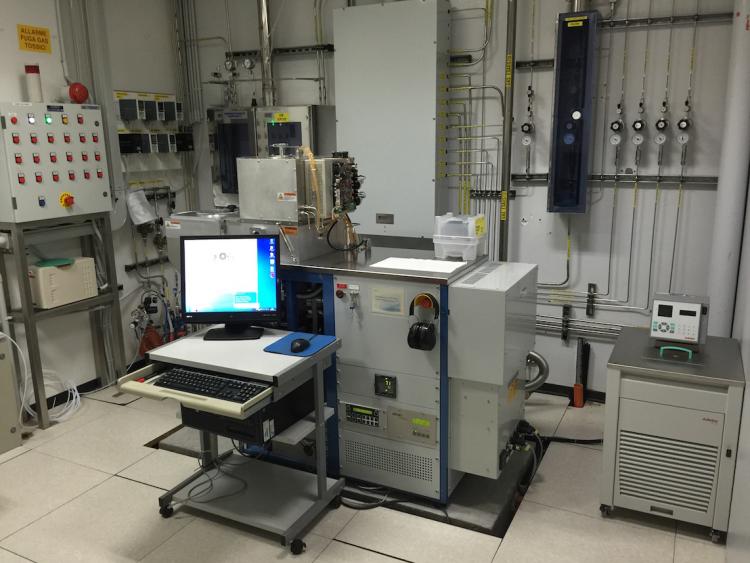 We exploit the capabilities of plasma to produce advanced materials for several applications ranging from amorphous solar cells, HIT solar cells, to advanced nanocsryalline materials to be... 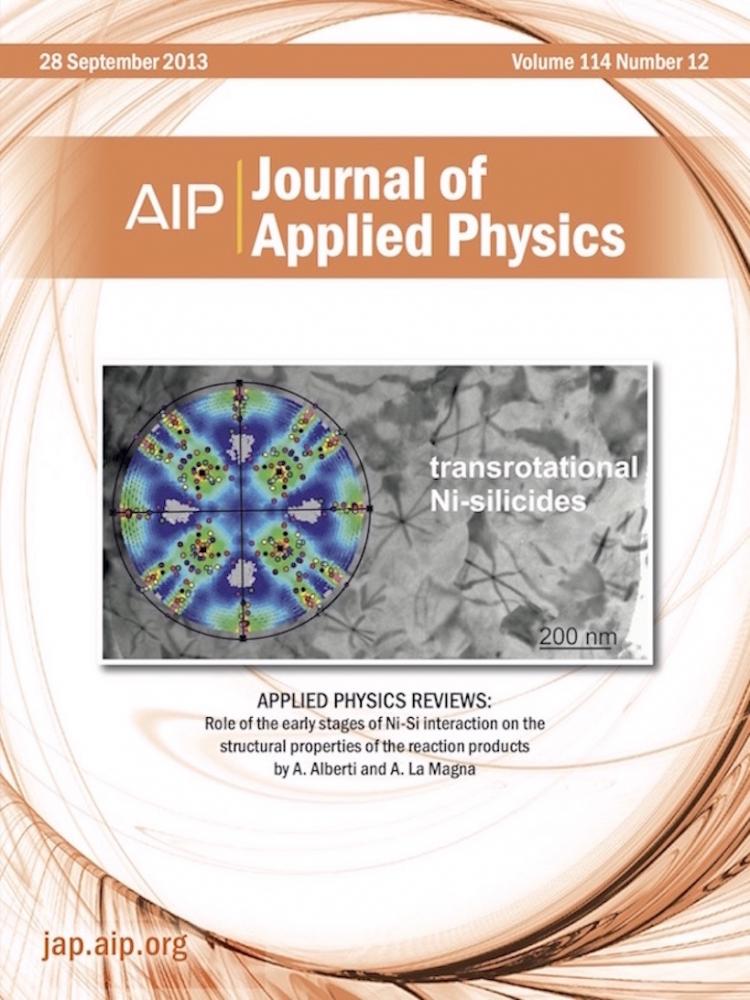 Nickel-Silicon compounds, as most of the transition metal silicides, show peculiar thermodynamic and kinetic behaviours. The large effort devoted to the comprehension of the phenomena governing Ni... 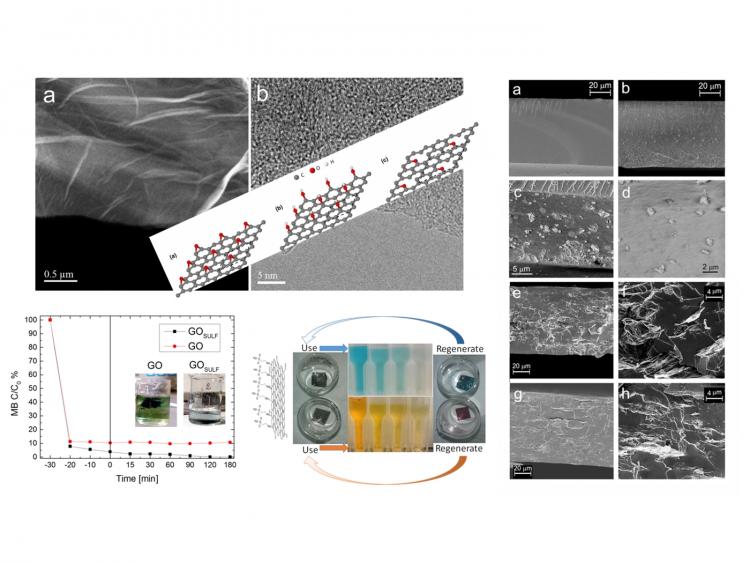 Among the functional nanostructured materials carbon-based nanostructures have an important place in water treatments for purification purposes. Their large aspect ratio and the... 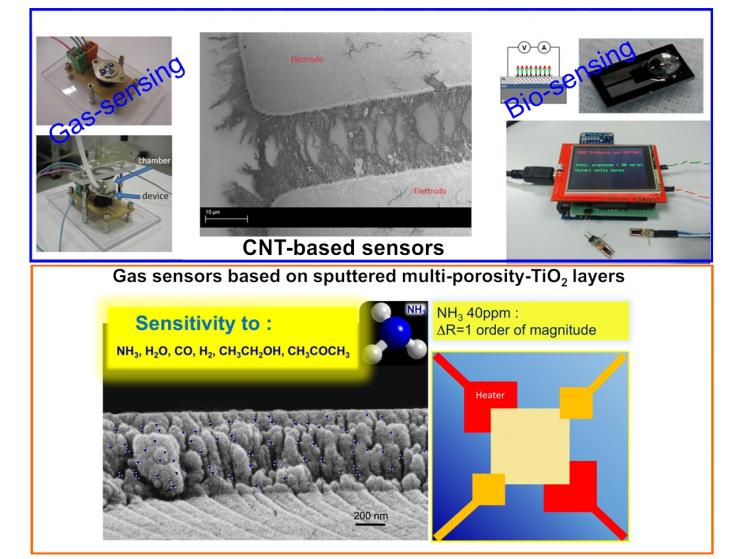 Chemical, Physical and Biological Sensors
Sensors based on electrical transduction systems and electromagnetic manipulation for environmental and biological applications

Carbon-based nanostructures and porous metal oxides are investigated as sensitive layers for the fabrication of electrical sensors for environmental and biological applications. Furthermore, an...

The main goal of the activity is the design and fabrication sensoristic systems based on optical and/or electrical devices for biological molecules...